Tatanka Ohitika (“Strong Buffalo”) is a Dakota elder and poet from the Sisseton-Wahpeton Oyate. He is a decorated Marine Corps Vietnam Veteran and American Indian Movement activist who has traveled around the world performing his work, collecting a million stories and writing a “zillion” poems, advocating for indigenous peoples across the globe.

His trusty sidekick, The Custard Kid, is a quickdraw music magician who colors the edges of their live poetry with layers of spontaneous and playful abandon. Together, they join forces to deliver much needed love medicine to a world in need, with wise words and dirty grooves, accompanied by psychedelic live video projections by Brian Dehler and interspersed with thoughtful conversations around art, activism, and our communities.  Joined by several other special guest artists, The Buffalo Show showcases important work by native artists seeking to restore balance to our world. Live shows are filmed for later airing on the Oyate Hotanin YouTube Channel.

The Buffalo Show is presented by Oyate Hotanin (“Voice of the People”) and Wavelets Creative, with support of Pangea World Theater.  Created by JG Everest and Thomas LaBlanc and presented at the Bryant Lake Bowl Theater in Minneapolis, MN, launched in April 2017. 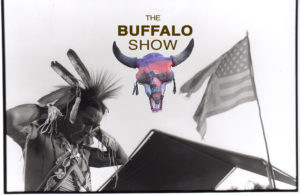